Ron Thal will be appearing on the Vigier Guitars Stand and on the Live Stage both days. 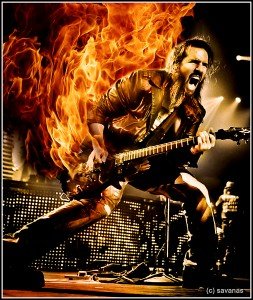 Ronald Jay Blumenthal, better known by his stage name Ron “Bumblefoot” Thal, is an American guitarist, songwriter, recording artist and producer. Thal adopted the name Bumblefoot from the bacterial infection of the same name (seriously!), which he learned about while helping his wife’s review for her veterinary exams. He is one of the co-lead guitarists in Guns N’ Roses and performs on their sixth studio album Chinese Democracy. Since the early 90s, Thal has released 9 CDs and a live DVD. His 1995 debut studio album, The Adventures of Bumblefoot, after being out of print for many years, was re-released in 2010 as a 15 Year Anniversary Edition CD. In commemoration of the Anniversary Edition release, a 200-page transcription book of the recording was also released which Thal himself transcribed.

Thal has appeared as a guest performer on other albums and on numerous compilation CD’s. He’s been the cover feature of several International guitar magazines as well as the subject of many print, radio and web interviews. Over the past twenty years, Thal has also worked with numerous bands and artists as producer, engineer, writer, arranger and performer. He has also written, and continues to write, TV jingles, theme songs and background music. From January through December 2011, Thal has recorded 9 singles which are available exclusively as digital downloads. Thal is also on the board of directors of the MS Research Foundation, a non-profit 501 organisation that raises money for Multiple Sclerosis research.