On Saturday 27th at 13.00 Black Star Riders / Thin Lizzy guitarist Scott Gorham will be signing on the Marshall Amplification stand.

Scott Gorham is an American guitarist and songwriter who rose to international recognition as one of the twin lead guitarists of the Irish rock band, Thin Lizzy. Although not a founding member of Thin Lizzy, he served a continuous membership after passing an audition in 1974, joining the band at a time when the band’s future was in doubt after the departures of original guitarist Eric Bell and his brief replacement Gary Moore. Gorham remained with Thin Lizzy until the band’s breakup in 1984. 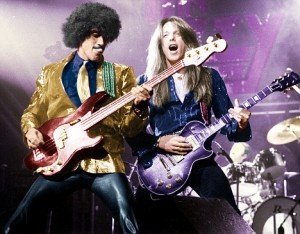 William Scott Gorham was born on St Patrick’s day, 17th March 1951 in Glendale, California. Scott’s musical career started at aged 13 when he played bass guitar in a local surf band. He later took up the guitar and played with various bands throughout his teenage years. Scott’s brother-in-law, Bob Siebenberg, moved to London and eventually joined ‘Supertramp’. With the possibility of also joining the group, Bob suggested Scott come to the UK to audition. This didn’t work out and Scott, now based in London, formed a band called ‘Fastbuck’.

This was Scott’s apprenticeship where he learned about independence and responsibility, but realising the band were not destined for great things, he made an effort to go for an audition at The Iroquo Country Club in London with a moderately successful Thin Lizzy in 1974. Scott went on to perfect the now famous twin-guitar harmony with Lizzy’s other ‘new recruit’, Brian ‘Robbo’ Robertson. 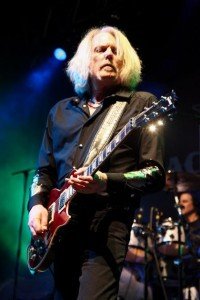 Scott Gorham Recalling those early days, Scott said: “When I came into the band from Los Angeles, Brian Robertson had a very traditional British blues style, and I had a very American way of playing, sounding and thinking, and Phil really liked the idea of melding the two styles. We were never afraid to experiment and try different things, or to do things in different ways. The mantra of the band was that we didn’t want to sound like anybody else.”

Withstanding the various line-up formats through the band’s career, Scott remained with Lizzy until the end in 1983.

After this, Gorham joined ‘Phenomena II’ where he joined forces with Leif Johansen (ex A-Ha) to form ’21 Guns’ releasing their debut album ‘Salute’ in 1992.

During this time, Scott met John Wetton (frontman of ‘Asia’) and was asked to help them record some demos in 1987. Other associations have included time with ‘The Rollins Band’ and ‘Supertramp’.

More recently, together with John Sykes, Tommy Aldridge and Francesco DiCosmo, Scott continues to bring Thin Lizzy to a new generation of fans.