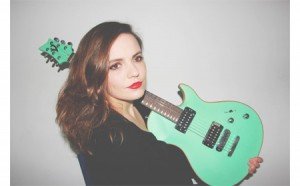 Mary Spender is a musician based in Bristol, combining her sultry voice and electric guitar to create pop songs infused with blues and soul. Her songwriting showcases her virtuosic style of guitar playing as well as her wide vocal range, with the recordings often being accompanied by stunning visuals.

She has toured the UK, Germany and US; highlights include supporting Gabrielle Aplin and Ian McCulloch, as well as performing at the Bluebird Cafe in Nashville. In 2016 Mary has sold out her first two headline shows with her band in Bristol (The Louisiana) and London (Servant Jazz Quarters).

In January 2017, Mary returned to the USA to represent Vigier Guitars at NAMM in Los Angeles. She showcased her unique Excalibur Indus fitted with A Little Thunder pickup, that adds bass to her solo performances as demonstrated at The Guitar Show.